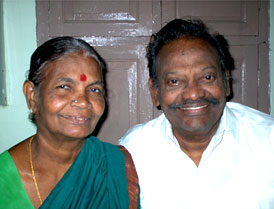 HUT India was founded by the renowned professor A.V.Rajagopalan and Renganayaki Rajagopalan in 1983 after the couple met with an incident that changed their lives forever.

In the rural Indian village of Puthanampatti, they witnessed a 7 year old girl carrying human waste on her head for disposal. This child was born into an untouchable family. Untouchables are members of a class that is excluded, considered unclean and defiling by the four Hindu castes. The child never went to school and was helping her parents in this manual scavenging, which had been their way of life for generations.

Renganayaki took the child into her arms and decided to take care of her no matter what. She believed education to be the only way to break the vicious cycle of terrible poverty and inhumane labor. HUT’s Rural English Medium School came into reality and started with fourteen untouchable children. 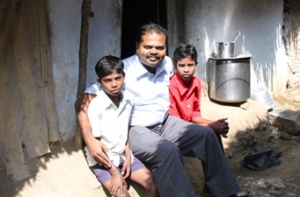 Inspired by his parents’ work and that of a Catholic priest from an Armenian Church (where he stayed during his medical schooling), Dr.Raja Venkatesh decided to join his parents’ charity in 1995. “I realized the purpose of my life was to serve the ailing poor and those unfortunate children,” stated Dr. Raja . He decided to start a free medical clinic for HIV victims and their children, thereby addressing yet another burning issue at the time. With no external funding, HUT created this small hospital in 1999, with the pension savings of Rajagopalan .

During that same year, Dr. Indhra, the wife of Dr.Raja, also joined the team, despite the wishes of her parents to pursue her studies in the United States, where her sister and brother-in-law were flourishing doctors in Texas. In 2005, Team HUT (consisting of the two doctors and a handful of committed volunteers), opened a 10 bedded hospital (HUT Community Care Hospital) exclusively for HIV patients.

Two years later, one male HIV patient begged for the HUT administration team to allow his two boys to sleep on the floor next to his bed. The team obviously agreed to this request. A few days later, after the man finally passed away, it became apparent that there was no relative or family friend to take care of his orphaned children.

As a result of this incident, the HUT orphanage campus began, and the two boys became the first occupants of what is now a loving shelter for HIV infected and orphaned children.

After many hardships, HUT has successfully served the community for more than 25 years, with the personal dedication and conviction of Dr. AVR and his son and daughter-in-law, the two doctors.

HUT’s orphanage now shelters 82 children, 31 HIV infected and 51 orphaned. The organization’s HIV community hospital has registered over 2,500 HIV clients and serves them with a twenty bedded hospital. HUT’s Rural English Medium School educates 750 children with 80% of them from the untouchable community.

Building lives, creating positive influences and delivering smiles on the lives of the orphaned children and the ailing people in rural India.

» Create safe, loving homes for the AIDS-infected orphaned children, where each child is given the opportunity to reach their full potential in their personal, educational and emotional life.

» Offer a valuable complementary education to the orphaned and historically underserved children.

» Deliver high-quality, compassionate and comprehensive health care, through its professional team, to the disadvantaged impoverished communities in rural India.

» Provide a comprehensive medical service to People Living with HIV/AIDS (PLHA), and to address their specific needs through care, treatment and a support hospice.